Good luck to Mrs Nicholas in her cricket endeavours. For those that don’t know, Mrs Nicholas  was the first Welsh player to appear in the Kia Super League , and she was a key contributor to Western Storm’s 2017 success.

On the back of that, the children in Year 3/4 had a taster session with Cricket Wales this afternoon, which they really enjoyed! 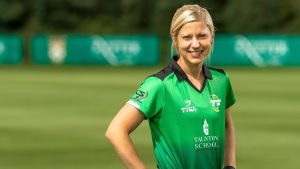 Good luck Mrs Nicholas in this years tournament – would you like a leaf on the achievement tree??!