Another busy week at Brynmill Primary!

Attendance – Congratulations to Y1/2L with 98%, and Y4/5J with 95.8% attendance this week. Llongyfarchiadau! And congratulations to Mrs Timaeus class who won the class attendance award for last term, they have celebrated with a pyjama party and lots of goodies to eat and drink.

The Netball Team competed in a tournament – On Wednesday night  a welsh coach came to our Netball training session. We practised our passing and footwork. On Thursday , we went to a Netball Tournament. There were eight teams and we played a five minute game against each team . We won one game and lost a couple but overall we did  well. I think everyone was proud of each other . The atmosphere in the room was great. We had fun watching the other matches.. We are looking forward to our next tournament. – Hazel

Y1/2 had a visit from Animal Zone as part of their topic on Mini Zoo – We had an amazing time when Animal Zone visited us on Wednesday. he brought snakes, tarantulas, a tortoise, millipedes, cockroaches, toads and more. We could hold the animals and we were taken photos of with the animals on a green screen. The animals were from the rain forest but some of them weren’t. It was a fantastic visit. He was funny, smart and kind. We were amazed, he taught us a lot.  – Ralph & Tamerlan

Blue Peter Book  Awards – A few months ago our school was picked to be one of 12 schools to be judges for this year’s Blue Peter Book Awards.  30 of us had 6 books to read, they were a mix of fiction and non-fiction.  I absolutely loved to read all the books especially ‘Rise Up’ because it really inspired me.  I couldn’t believe those young people changed our world.  In fact one day I want to be like them.  We are looking forward to finding out the winning books on Blue Peter on World Book Day.  I loved having the opportunity to read the books and be a part of Blue Peter. – Ishaaq

World Book Day – Thursday 5th March is World Book Day, we would like to invite children to dress up as a book character and/ or bring a favourite book to school.

Eco Club – Our Eco Club have been learning about the negative effects of cars idling outside schools and have designed posters. Facts include:-

I am writing to inform you about turning your car of when you are waiting to pick up your child. It lets of a lot of fumes that is not good for your health.  Did you know that if you keep your car running for longer than 10 seconds it lets off more fumes than it would if you turned your car of and then back on again. We as an eco-council and club are trying hard to keep our environment healthy and are school plastic free. If your child would like to join eco club, you can get a letter from the office. Sincerely, Nia –  on behalf of the Eco club and Eco Council 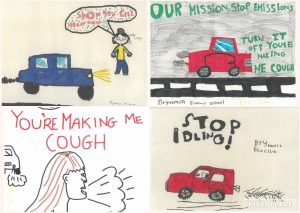 Eirlys, the lollipop lady – Unfortunately Eirlys our School Crossing Patrol will be retiring next week after many years of service,  if you would like to contribute towards a leaving gift we would be happy to accept donations.

Whats on Next Week?